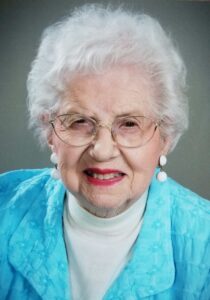 Barbara Jean Collier Jonson, age 99, a life-long resident of Sedalia, passed away peacefully at Cedarhurst Senior Living, July 16, 2020, two months before her 100th birthday.  Since turning 99, Barbara often referred to “living her 100th year,” relishing her longevity with a clarity and mental acuity that allowed her to recall, to the astonishment of others, minute details of faces, people and events over many decades.

Barbara was born September 15, 1920, after the Spanish Flu pandemic, to parents Sherlie Ursul and Lottie Mae Collier (Watson), joining sister Genevieve. How ironic that she grew up in the era of the Great Depression and leaves this world in another depression framed by yet another pandemic.  Barbara attended Mark Twain Elementary School, was a 1938 graduate of Smith-Cotton High School and attended Central Business College excelling in typing and shorthand. She joined Fifth Street Methodist Church (now Wesley United Methodist) at age 15 and 85 years later still supports her church family.

At her first job at Bothwell Hospital, one of a handful of full-time employees, she worked the switchboard and delivered mail to patients. One patient, William Neville Jonson, a handsome Army lieutenant would become her husband of 52 years. At the end of WW2, Barbara and Neville returned to Sedalia from Neville’s last assignment in Monterey, CA with newborn son Michael.

In 1982 Barbara retired after thirty years with the Sedalia Credit Exchange using only two sick days during her entire career. She and Neville enjoyed spending winters in Mesa, AZ near Barbara’s sister Genevieve. For over six decades she and “Gen” wrote bi-weekly letters detailing family lives and sharing recipes and photographs. Barbara enjoyed church and community activities, working on the church newsletter for 30 years, delivering Meals on Wheels, and attending Sedalia Symphony concerts. She learned to drive in retirement, anticipating her later years might require this skill.  Unknown to her, she was recognized in the community as “who is that old lady in the white Cadillac creeping down the street.”  Creeping yes, but accident free!

As her years advanced, she endured some of the physical ailments of old age, but always had the ability to rebound and prosper. Typical of her generation, she always “presented” herself well in public with stylish outfits and just the right blush of facial color.

Barbara will be remembered as a caring steadfast friend who listened attentively, one who could be relied on for a kind word or a helpful favor. If lucky, you might receive a treat from a skilled cook and baker.  Surviving family include son William Michael Jonson (Phillip Hoskins), Indianapolis, IN; niece Margaret Jonson (George), Sedalia; and nephews James H. Jonson (Patsy), San Antonio, TX; J. Donald Anderson (Alice), Bellingham, WA., and Vincent R. Anderson (Marsha), Hewitt, TX. Two cherished family friends, Millicent Hale and Martha Bridges helped Barbara maintain her independence during her later years, and the staffs of Cedarhurst and Crossroads Hospice provided loving care at the end of her long and well-lived life.

As most of her contemporaries are deceased, Barbara requested cremation with no formal service. Her remains will be placed with her husband in Memorial Park Cemetery with Heckart Funeral Home in charge of arrangements.   Memorials in honor of Barbara may be directed to the Sedalia Symphony Society or Wesley United Methodist Church.

Send Flowers ~ from your local florist